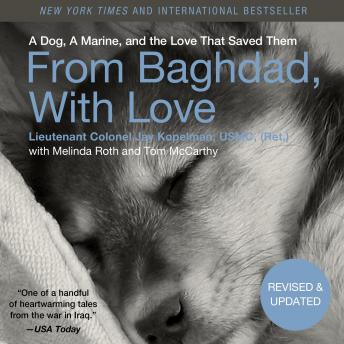 From Baghdad, With Love: A Dog, A Marine, and the Love That Saved Them

An ultimately uplifting lesson on life and love that only a special bond can bring. What happens when the indelible bond between a man and a dog formed in the harshest of conditions is put the test? Moving and uplifting, here is the long-awaited updated edition of The New York Times best-selling From Baghdad with Love. Lt. Col. Jay Kopelman went to extraordinary lengths to bring back to America the puppy his combat-hardened Marines rescued in war-torn Fallujah—called the “most dangerous city on Earth.” That tense journey back to peacetime America was the easy part, they would learn. By the time they returned home, Lava and Lt. Col. Kopelman were kindred spirits, bound by the chaos they had shared in Iraq. From hardened soldiers to wartime journalists to endangered Iraqi citizens, From Baghdad, With Love told the unforgettable true story of an unlikely band of heroes who learn unexpected lessons about life, death, and war from a mangy little flea-ridden refugee. Lt. Col. Kopelman won the hearts of readers everywhere with his moving story of adopting Lava. This revised and updated edition takes readers back to America and new challenges both Lt. Col. Kopelman and Lava faced—what millions of veterans returning from wars in Iraq and Afghanistan faced: Trying to live normal lives after chaotic life-and-death combat tours. As they settled back into life far from Iraq and war, he and Lava learned that while they both faced daily challenges, they had each other, and that bond proved to be all they needed. The transition was not easy but with each other’s love they would survive. Theirs was a passage ripe with answers and inspiration for anyone.