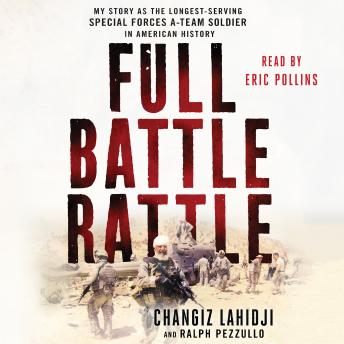 With over 100 combat missions, and 24 years as a Green Beret, Changiz Lahidji is an expert in military operations. Full Battle Rattle is the legendary audiobook memoir of a soldier who served America in every war since Vietnam.
Master Sergeant Changiz Lahidji served on Special Forces A teams longer than anyone in history, completing over a hundred combat missions in Afghanistan. Changiz is a Special Forces legend. He also happens to be the first Muslim Green Beret.
Changiz served this country starting with Operation Eagle Claw in 1980, when he entered Tehran on a one-man mission to spy on Iranian soldiers guarding the US Embassy where 52 US diplomats were being held hostage. Three years later, he was in Beirut, Lebanon when a suicide car bomb exploded in front of the US Embassy killing 83 people. Weeks after that, he was shot by Hezbollah terrorists on a night mission.
In Operation Iraqi Freedom, he led a convoy that was ambushed on its way to Fallujah. He was clearing houses in Mogadishu, Somalia on October, 1993 when a US Black Hawk helicopter was shot down 50 feet away from him in the incident that inspired Black Hawk Down. In 2002, he dressed as a farmer and snuck into Eastern Afghanistan and located Osama Bin Laden for the CIA.
Along the way, Changiz earned numerous commendations, including the Special Forces Legion of Merit, Purple Hearts, and many others. Last year he was nominated for induction in Military Intelligence Hall of Fame and cited as "the finest noncommissioned officer to ever serve in Special Forces."
Written with Ralph Pezzullo, Changiz's story is an amazing audiobook of perseverance and courage, of combat and one man's love for his adopted country.