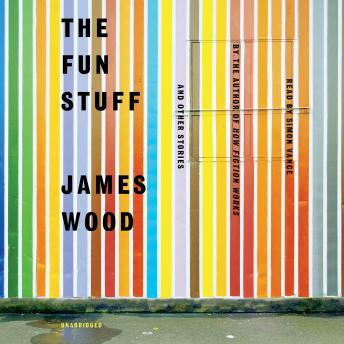 The Fun Stuff: And Other Essays

A new, far-ranging collection of essays from "the strongest...literary critic we have." (New York Review of Books)
Following The Broken Estate, The Irresponsible Self, and How Fiction Works-books that established James Wood as the leading critic of his generation-The Fun Stuff confirms Wood's preeminence, not only as a discerning judge but also as an appreciator of the contemporary novel. In twenty-five passionate, sparkling dispatches-which range over such crucial writers as Thomas Hardy, Leo Tolstoy, Edmund Wilson, and Mikhail Lermontov-Wood offers a panoramic look at the modern novel. He effortlessly connects his encyclopedic, passionate understanding of the literary canon with an equally in-depth analysis of the most important authors writing today, including Cormac McCarthy, Lydia Davis, and Aleksandar Hemon.
Included in The Fun Stuff is the title essay on Keith Moon and the lost joys of drumming-which was a finalist for last year's National Magazine Awards-as well as Wood's essay on George Orwell, which Christopher Hitchens selected for The Best American Essays 2010. The Fun Stuff is indispensable reading for anyone who cares about contemporary literature.

Fun Stuff: And Other Essays