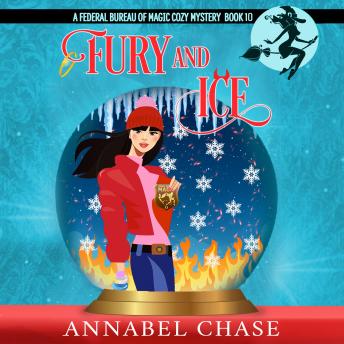 Welcome to Chipping Cheddar where supernaturals are hidden in plain sight

When a woman is murdered behind the library, Chief Fox realizes the victim was more than she seemed and enlists the aid of Chipping Cheddar’s resident Federal Bureau of Magic agent, Eden Fury. The woman’s death also triggers the arrival of Alcina, a powerful supernatural hellbent on uncovering the killer’s identity and bringing them to justice. Alcina views Eden as her polar opposite on the supernatural scale of good and evil and doesn’t trust her to conduct a proper investigation, no matter what her badge says.

Meanwhile, Grandma and Aunt Thora have decided to participate in Chipping Cheddar’s first annual Mature Woman competition in order to raise funds for the senior center, a decision that Eden worries will result in more trouble than a washing machine is worth.

Will Eden keep Alcina at bay long enough to save the competition and find the killer—or has she finally met her supernatural match?

Fury and Ice is the 10th book in the Federal Bureau of Magic series.