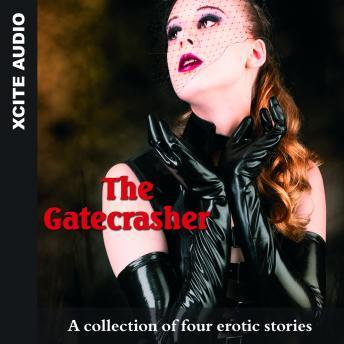 The Gatecrasher by Stephen Albrow

Curiosity killed the cat is a saying with which Charlotte is familiar, but she doesn't intend to pay it any attention. When she hears that a new lord, Richard Parker, has moved into the local manor she is immediately intrigued, particularly when he is featured on the local news and she sees how good-looking he is...

The Gift by Dolores Day

Susanna is bored and bored women are dangerous, especially if they have the money and leisure to feel time weighing heavily on their beautifully clad shoulders. Married to the much older Lord Marksbury, whose skills in the bedroom are not so much inferior as non-existent, Susanna longs for a companion who will understand her needs...

Penny is a good girl. She works in accounts. So when she finds herself, sick with nerves and apprehension, waiting to perform onstage as a lap dancer at a gentleman's club, it's clear that some encouragement is needed...

The Boss by DMW Carol

He is so arrogant, so sure of his authority. He struts as he moves around the office (his own little fiefdom) and his alpha male attitude is guaranteed to bring out the worst in any employee who questions his power. The Boss had better be careful because he is soon to find his status as top dog being seriously undermined...