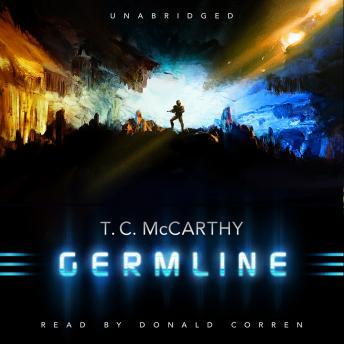 Germline (n): the genetic material contained in a cellular lineage that can be passed to the next generation. Also (slang): secret military program to develop genetically engineered supersoldiers.
One hundred years from now, Russia and the United States are at odds again. This time the war has gone hot. Heavily armored soldiers battle genetically engineered troops hundreds of meters below the icy, mineral-rich mountains of Kazakhstan.
War is Oscar Wendell’s ticket to greatness. A reporter for the Stars and Stripes, he has the only one-way ticket to the front lines. The front smells of blood and fire and death—it smells like a Pulitzer.
But Kaz changes people, and the chaos of war feels a bit too much like home. Hooked on a dangerous cocktail of drugs and adrenaline, Oscar starts down a dark road that he won’t be able to turn back from.