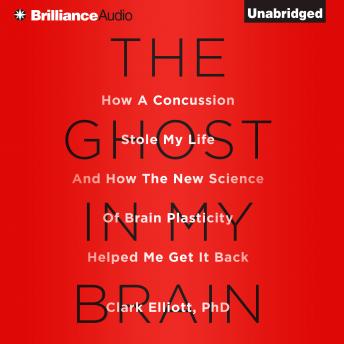 The Ghost in My Brain

One fall day in 1999, professor Clark Elliott was on his way to give a lecture when his car was rear-ended. Shaken up but without any noticeable injuries, Clark surveyed the damage to his car, spoke to EMTs called to the scene, then continued on his drive to the DePaul University campus where he teaches.

It would take four more days for Clark to receive a diagnosis: concussion.

As a scientist in the field of artificial intelligence, Clark was intrigued by the effects of his brain trauma. At a glance he might have looked fine-perhaps a little odd at closer inspection-but under the hood severe cognitive impairments affected all aspects of his daily life. Remarkably, Clark kept detailed notes throughout his experience, an astonishing 1,200 pages of documentation that are the basis of this fascinating book.

After eight years, the cognitive demands of his job and of being a parent finally became more than he could manage. In one final effort to hold on to his life, Clark crossed paths with two brilliant Chicago-area researcher-clinicians-one an optometrist using neurodevelopmental techniques, the other a cognitive restructuring specialist working on the leading edge of brain plasticity. Together, they targeted the visual centers of Clark's brain, teaching him to use new neural pathways where others had been damaged. The impact was dramatic. Within weeks, the ghost of who he had been returned.

The Ghost in My Brain is a powerful record of what life is like as a concussive: the endless and exhausting need for creativity as one navigates through days filled with bizarre changes in perception, strange social dilemmas, and a sometimes overwhelming sense of alienation. It's also an unforgettable chronicle of recovery, one that provides a window into the tremendous power of the human brain and offers new hope to those suffering from concussions and other brain traumas.

Ghost in My Brain