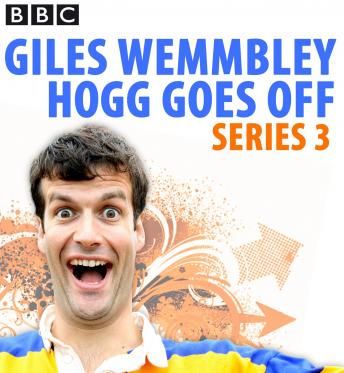 He's back! Budleigh Salterton's most famous citizen is off round the world on another five adventures. Meet Giles Wemmbley Hogg - 2 'm's, 2 'g's. Traveller, backpacker, ethnologist, fearless investigator of cultural diversity, and upper middle-class student ponce from Budleigh Salterton. And this time, Giles has graduated from University, with a first! He's actually the first person ever to have finished a course in Canadian Studies, and now he's on the job market and looking for anyone who'll have him. In these six episodes, with his trusty portable DAT and his Charterhouse rugby shirt, Giles tries his hand at the sort of jobs that only rich fathers' rich friends get for their idiot sons. Each week he travels to far-off foreign lands and joins the exotic world of work, and each week he makes a thumping great prat of himself! First he heads to an oil rig on the Cromarty Firth; then it's off to Japan where Giles tries out bond trading. Episode Three sees him being a most unlikely chalet girl in France; while in Episode Four he's leading a European ballet tour. Haiti is his destination in the fifth episode, where he experiments with voodoo, and in the final episode he heads to Ireland to find an old flame. Marcus Brigstocke stars as Giles, with Catherine Tate as Arabella. Guest stars include Jessica Hynes, Katy Brand and Miranda Hart.