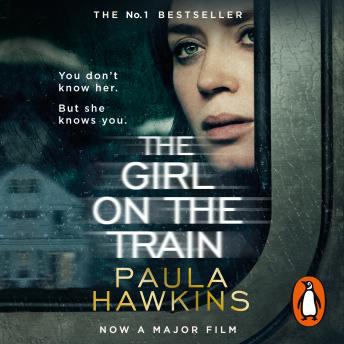 The Girl on the Train

Winner of the 2016 Audie Award for Audiobook of the Year.

Rachel catches the same commuter train every morning. She knows it will wait at the same signal each time, overlooking a row of back gardens. She's even started to feel like she knows the people who live in one of the houses. 'Jess and Jason', she calls them. Their life - as she sees it - is perfect. If only Rachel could be that happy.

And then she sees something shocking. It's only a minute until the train moves on, but it's enough.

Now everything's changed. Now Rachel has a chance to become a part of the lives she's only watched from afar.

Now they'll see; she's much more than just the girl on the train...

'Gripping, enthralling - a top-notch thriller and a compulsive read.' SJ Watson, bestselling author of BEFORE I GO TO SLEEP

Loved this!! From start to finish the story had me! I am a terrible reader and so I am loving audio books. I can wiz through a book in no time. Brilliant story with some great twists and turns.

One of the best read and written audiobooks around

I really loved this book. I started it when I was getting a tattoo and it really distracted me from the pain. I found the narration soothing. Definitely recommend.

Loved it, could not put this book down. Wonderfully written.

I have really enjoyed this book. The narration was easy to listen to.

I loved this book. I felt that I was in the head of the characters. Could not stop listening. I am so sad I have finished the book!

I really liked this book. it was well written and was an interesting story. I liked how each character had their stories told . And how relevant they were to each other.

Interesting sorry, but narrators destroy all the fun...

Struggled to get into the book. But eventually the pace increased enough for me to listen till the end.

This was quite a slow paced book and one of the narrators sounded like the voiceover lady from Masterchef, but it was fairly enjoyable. I wasn't that bowled over by the plot but the writing was clever and insightful.

I really enjoyed the mystery!

I found this book slow , the story line was good , but just dragged out.

Loved it! I'm such a slow reader and knew I'd never read it so decided to listen to it and finished it in 2 days I was so hooked!

I thoroughly enjoyed this mystery thriller. Sometimes I fell asleep (only because it was at the end of a long day). I would wake, flick back a chapter or two and try to work out where I was up to. I would have liked to more easily see the name of the narrator (when the topic and narrator changed). This would have enabled me to find my place a little more easily! I didn't want to sleep; I just wanted to know what was going to happen next!.

It was enjoyable just listening to something than reading for a change.

What an amazing book that you could not feel the time when reading it. It makes you feel everyone is a murderer, until you are surprised about who the real murderers are. I feel like I am on the train with Rachel. I felt sorry for Megan, loved Rachel and ultimately loved Anna. Such a one-of-the kind story. First experience with audiobooks, and not the last i think.

The narration was done well, but I found too many repetitions in the story.

I did enjoy it and could feel the characters just not great but good.

Although I like the twist at the end, the story progressed too slow for me (I kept waiting for something to happen). Narration was alright.

Kept me guessing. A good story and very well read.

Fairly good story but I found it a bit slow going. Good insight into alcoholism Narrator did a good job.

Liked the narrating. Guessed the ending quite early but enjoyed listening to it still to the very end.

This book keeps you guessing.

Good story. Lots of drama, mystery and twists. Worth the read/ listen!

The narrators were brilliant! And the book was well written.

Great read! Kept me wondering all the time, didn't want it to end. Loved it!

Loved it! Such a great story, didn't want to stop listening, leaves you guessing until the end.

Excellent, exciting and thought provoking book . Narration make it clearer with more impact. Thank you audiobooks for getting it right.

Awesome book! It keeps me focused as I drive 14 hours. Good twists!

This was a little slow to begin with. It did improve and was particularly captivating in the final third. This was my first audio book and I found the narration quite annoying.

Really great narration, having multiple female voices really helped the story line, otherwise it would have been a bit confusing. I don't think I'll bother seeing the movie as I don't think they'll do it justice.

The narrators were brilliant! And the book was well written. This was my first audiobook and I truly enjoyed it. Good job!

First audio book and will definitely be listening to more. Riveting narrative and a great story.

Awsome!!! So thrilling. My favorite audiobook so far. Recommended this for friends. And the narrators are incredibly talented!

I really enjoyed the story. Very easy to listen to and well narrated.

I could not stop listening. The narrators were brilliant!

I thoroughly enjoyed this book and my first audio-book experience. A gripping story which was narrated beautifully.

I had been looking at the book in shops for awhile and finally decided to give it a go, and was NOT disappointed. It was a worrying description of how easy it would be to play with peoples emotions and an insight into how scared people can be after a break up. Has made me start to look at drinking in a different way. Great read.

Went a bit slow in the begining but by the middle of the book its full of suspense . Two out of the three narrators were good but the third was very boring, and annoying. Sounded like a robot with a British accent.

Loved it disappointed It has ended! Yet I raced to get to the end.

WOW! a great drama! Very enjoyable. I listened to half an hour each night - really intriguing.

Really enjoyed it. It starts as a relaxing read, but turns into difficult life story.

This was the first audio book I have listened to and I really enjoyed it.

Book was enjoyable. Narration good, although the count duckula impression got a bit much at times! Other then that, really good.

This book was about an 8/10. Narration was really good but the story went on too long for my liking and the end was predictable from quite early on. The main character I found very likable. Good just not great.

Great thriller we enjoyed listening to on a long drive.

Didn't get the hype this book has received. An OK suspense read although rather slow at times. Struggled to warm to any of the characters which made listening a bit of a drag.

I thoroughly enjoyed this book. I normally just listen to audiobooks on my way to and from work, but this one gripped me so that I stayed up until late night listening - 'just one more chapter!'. I thought it was very well written from the different perspectives and this was expertly captured by the different narrators. I'll definitely recommend this one!

First book on Audible.com. Compelling plot and sympathetic characters. The narrator is excellent. Listening to it while on stationary bike and it's helping me stay on longer. Unrelated to the book: chapters can be easier to navigate or to plan listening time if each chapter had its own time tracker instead of cumulative/scaled time track.

Enthralling, great to listen to during the commute. My first audio book and what a choice.

very absorbing. a good suspense. . But. some times slow moving.

Gripping story. Great use of emotions and perceptons to create a twisting plot.

Loved every bit of it! Easy to follow and hard to stop listening gripping stuff!

Very engaging story. This was my first audiobook and I am a complete convert to the format. The narration was excellent and was the reason I got through the book so quickly.

Very descriptive story & very well read. Really felt like I knew the characters & was on their emotional roller coaster throughout the story.

The Girl on the Train was an excellent book, the proverbial page turner. The narration was superb and I couldn't wait to continue listening at every turn. I even did more exercise just to finish listening to the book. Great job all 'round.

It was great while I was walking. Very thrilling.

Great book. Couldn't stop listening to it. Would highly recommend this.

omg what a story kept me enthralled till the end. After a slow and sad start it unfolded into a wonderfully gripping tale.

Very well written book great twist at the end and kept me interested the whole way through. A must read to all suspense lovers.

Chose this particular story as it was listed as one of the best audiobooks for 2015. Quite honestly I found snippets of it to be very tough to wade through and other sections brilliantly enthralling. The story is told in the first person by the main characters of the book, flipping forward and backward in time and ultimately drawing all their threads to a conclusion in the end. The majority is told from the perspective of the girl on the train and you get to know here and all her problems very well. I think the concept of the story (the girl on the train who sees something) is terrific, however I eventually found the back and forth approach between the characters telling the story a but tedious and at times rather frustrating. The characters are very different from each other and on the positive side the way their lives overlap as the story unfolds is the brilliant part. No spoilers from me but in my view the "who done it?" is not who you expect. Glad to get to the end and rate it as three stars.