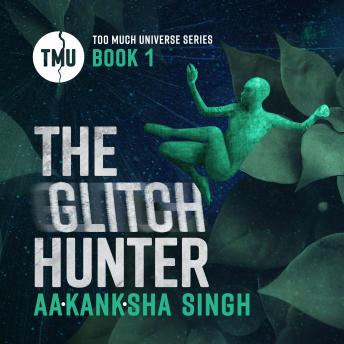 The Glitch Hunter: Too Much Universe Series Book 1

Life is a cosmic computer simulation that can malfunction at any time.The prophet said so and the gods-fearing folk of Domaan city certainly believe it. It’s why Rhea Harte has a job.

On a Friday afternoon, as she investigates yet another falsely-reported “glitch”, she daydreams of the old Terran flatfilms she will binge-watch later. Time may or may not be an illusion, but a free weekend is a profoundly real thing.

Then a glitch drastically changes the course of her life.Her only surviving kin goes missing under baffling circumstances, sucking her into a mystery that turns increasingly paranormal with every clue.

With help from a failed scientist named Sam and a transhuman shaman called Kunai, Rhea must confront her own harrowing past, answer impossible questions, and hold on to her sanity as she chases down a dangerous kidnapper who may or may not be a mythical demon.

Her secret weapon is a boon from the gods themselves, which means she has no idea how to use it.The Glitch Hunter is the first book in the Too Much Universe series.