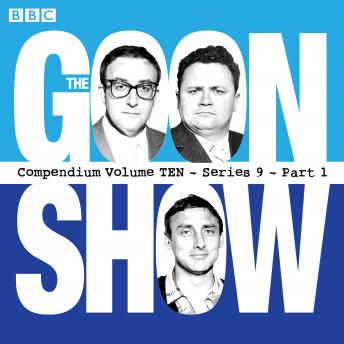 Twelve episodes of the groundbreaking show starring Spike Milligan, Harry Secombe and Peter Sellers. Immensely popular and hugely influential, legendary radio series The Goon Show changed the face of British comedy. This collection of episodes is taken from the first part of the ninth series, first broadcast in 1958-59.

The episodes included are The Sahara Desert Statue; I Was Monty’s Treble; The £100,000 Penny, The Pam’s Paper Insurance Policy; The Mountain Eaters; The Childe Harolde Rewarde; The Seagoon Memoirs; Queen Anne’s Rain; The Battle of Spion Kop; Ned’s Atomic Dustbin; Who Is Pink Oboe? and The Call of the West. Also included are a number of bonus items.