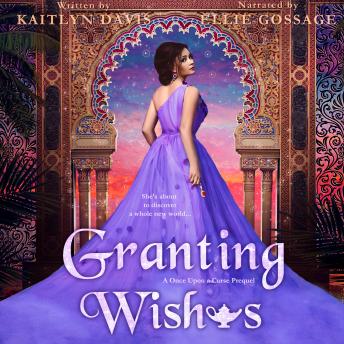 Granting Wishes (A Once Upon a Curse Prequel)

She's about to discover a whole new world... Don't miss GRANTING WISHES, a fantasy romance from bestselling author Kaitlyn Davis that reimagines the classic fairy tale of Aladdin. (*This prequel novella is roughly ½ the length of the other books.)

'His words come back to me--magic is the law. I guess I'm making my own set of rules.'

Alanna thought rock climbing in Yosemite National Park would be the trip of a lifetime. Until an earthquake strikes and she finds herself plummeting to her death. But instead of slamming into the forest floor, Alanna drops into a secret underground cave where she's confronted by the impossible--magic.

A mysterious man named Erick uses incredible powers to save her life, then tells her that his magical world has collided with earth, merging the two together. Alanna writes it off as crazy, until he shows her a vision of her brother being dragged down a sandy cobblestone street in chains. Crazy or not, she'll do anything to save him.

As Alanna and Erick team up to rescue her brother from the clutches of a decrepit sorcerer king, fate intervenes in the form of a handsome prince. Alanna doesn't know who to trust, but in this foreign land, flying solo just might get her killed...

Granting Wishes (A Once Upon a Curse Prequel)

This title is due for release on November 15, 2019
We'll send you an email as soon as it is available!