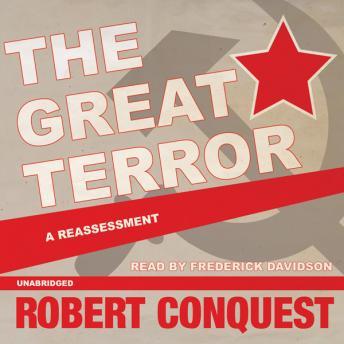 The Great Terror: A Reassessment

The definitive work on Stalin's purges, The Great Terror was universally acclaimed when it first appeared in 1968. While the original volume had relied heavily on unofficial sources, later developments within the Soviet Union provided an avalanche of new material, which Conquest has mined to write this revised and updated edition of his classic work. Under the light of fresh evidence, it is remarkable how many of Conquest's most disturbing conclusions have been verified. Many details have also been added, including hitherto secret information on the three great "Moscow Trials," the purge of writers and other members of the intelligentsia, life in the labor camps, and many other key matters. Both a leading Sovietologist and a highly respected poet, Conquest blends profound research with evocative prose to create a compelling and eloquent chronicle of one of the 20th century's most tragic events.

"Mr. Conquest's stature in the historiography of modern Europe is assured....Stalin was not only the master criminal; he was the master concealer. It took a master detective, and a poet, like Mr. Conquest to unmask him completely"-New York Times Book Review