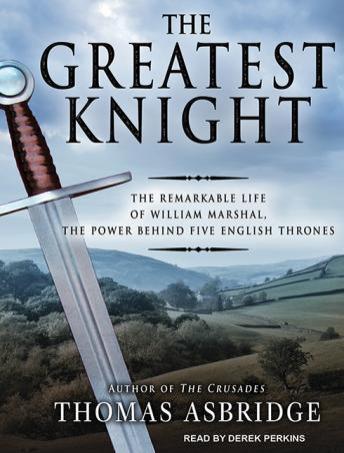 The Greatest Knight: The Remarkable Life of William Marshal, the Power Behind Five English Thrones

In The Greatest Knight, renowned historian Thomas Asbridge draws upon the thirteenth-century biography and an array of other contemporary evidence to present a compelling account of William Marshal's life and times. Asbridge charts the unparalleled rise to prominence of a man bound to a code of honor yet driven by unquenchable ambition.

Marshal was the true Lancelot of his era-a peerless warrior and paragon of chivalry. As a five-year-old boy, William was sentenced to execution and led to the gallows, yet this landless younger son survived his brush with death, and went on to train as a medieval knight. Against all odds, Marshal rose through the ranks-serving at the right hand of five English monarchs-to become a celebrated tournament champion, a baron and politician, and, ultimately, regent of the realm.

This knight's tale lays bare the brutish realities of medieval warfare and the machinations of royal court, and draws us into the heart of a formative period of our history. It is the story of one remarkable man, the birth of the knightly class to which he belonged, and the forging of the English nation.