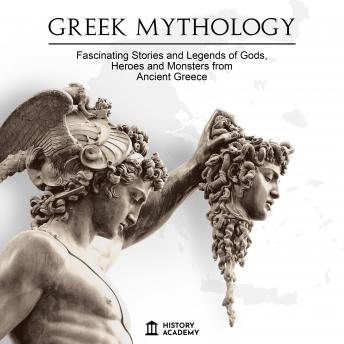 Before science, there were myths. Today we see them as fiction, butin the past myths were a way to explain all the natural phenomena that surrounded mankind.

Every myth present in the book is supported by additional material regarding ancient Greeks’ history and culture to help our readers understand the cultural background of the time. The book alsoincludes a genealogical tree to clarify the relationships between the different characters.

“Greek Mythology” is a modern collection of ancient Greek myths gathered by History Academy to let the new generations enjoy these ancient immortal tales.Every myth is full of adventures that will amaze both experienced readers and occasional ones.This book is perfect for anyone who’s passionate about mythology and art and wishes to know more about myths like Pandora’s box or Prometheus’ theft of fire.

Greek myth has become a part of us in ways that we do not fully appreciate. In fact, heroes like Achilles, Heracles, and Perseus have helped to form the image that we have today of the hero. The basis for much of the philosophy and dramatic arts that characterize Western society today has its root in Ancient Greek culture, which was closely tied to and spurred on by Greek myth and legend. The Ancient Greeks used the tales of their gods and heroes to help understand their world and their own place in it. In Greek Mythology: “Fascinating Stories and Legends of Greek Gods, Goddesses, Heroes and Monster”, you will learn about all the gods and heroes by reading the formative myths of the Greeks.

“Greek Mythology” explore the Greek gods and the Ancient Greek legends by delving into the tales told by Greek and Roman poets and historians, including Homer. They told tales about the creation of the universe, how the Titans were the first gods before the Olympians, and how the Titans and Olympians went to war with one another.