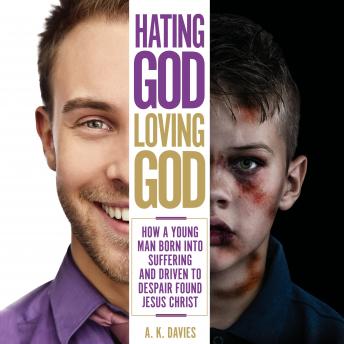 Written By: A. K. Davies

Hating God, Loving God presents the author’s graphic and painful memories of being raised in a secretive, abusive, and manipulative cult, and how his childhood sufferings spilled over into a troubled adolescence and a deeply disturbed adulthood. In throwing off the lies told to him by the cult’s elders, he also threw away any sense of God’s love and mercy.

His pain, fuelled by a hatred of God, whom he blamed for all his troubles, turned him into a bully, a petty thief, and, but for the grace of God, a murderer. Somehow, he survived adolescence, got an education, and set out on the road to making money, believing that the accumulation of possessions was the only thing that would earn him respect. But his pain persisted, and he sought relief in all the wrong places. Even the unexpected love of a good woman was not enough to take away the pain.

Adrift in an ocean of despair, he decided to commit suicide. It was only then when he was at his lowest point that he was ready to accept a truth he had persistently denied: the truth that God loved him.

After giving his life to Jesus Christ, who transformed him and renewed his soul, he went from hating God to loving God.