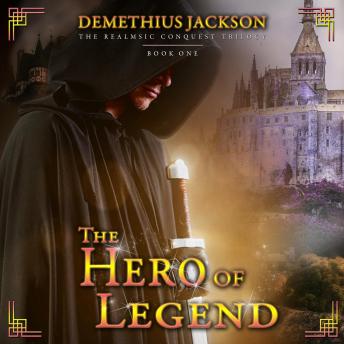 The Hero of Legend, The: Book One

When a young, inexperienced King loses his kingdom to a merciless Warlord, he seeks a Hero of Legend, but instead uncovers a magical secret that could destroy the kingdom!


The Realm is the world's only magical kingdom and has never known peace. An endless war has raged between its two people - Magicals and Laymen (Non-Magicals). Laymen have now rallied behind the Warlord Damian - the son of the Realm's greatest enemy. Promising safety from magic and riches beyond imagination, he amasses an unstoppable Legion of Warriors and charges toward the Realmsic Kingdom.


Facing eminent destruction, the Realmsic throne is abandoned! When all others refuse the call, Maebus, a fledgling councilman is reluctantly catapulted into leadership. As the newest King, he faces the Warlord Damian and is defeated! Now an exile in his own home, Maebus, with the help of friends, must reclaim the kingdom by locating the Hero of Legend who is destined to save the Realm. But soon he discovers why the kingdom may never be saved.


Award-winning fantasy author Demethius Jackson shares his compelling tale of an unacquainted King, a merciless Warlord, and an unexpected Hero of Legend. Join the Realmsic Kingdom, and become a part of this magical fantasy adventure!

Hero of Legend, The: Book One