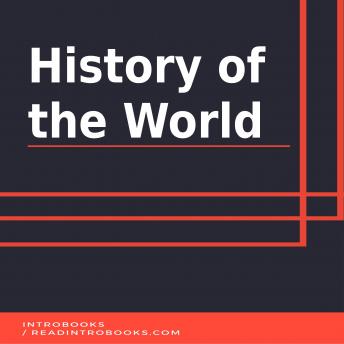 History of the World

The world history defines the history of mankind as decided by the study of archaeological and inscribed archives. The recorded ancient history starts when writing was invented. Prehistory is marked by the Early Stone Age or the Palaeolithic Era which was followed by New Stone Age or Neolithic Era. The Agricultural Revolution was from 8000 and 5000 BCE; it was during this time that the humans progressed and started farming and animal husbandry and settled down to form villages and then civilizations. Expansion of these villages required one to travel and travelling from one place to the other lead to development of transport.

Developments of farming also lead to divisions in labours and also bought lead to division of society in upper class, middle class and lower class. More and more civilizations came up and the population grew fast spreading all over the world.

The history of the old world is specially the Mediterranean and Europe is divided in Antiquity or ancient history till the 476 CE, the Middle Ages or Postclassical Ages till 15 century this age also included the Islamic Golden Age and Renaissance Period, the Early Modern Period which lasted from 15th century till the 18th century and also comprised of Age of Enlightenment and Late Modern Period and finally from the Industrial Revolution till present day also counting Contemporary history.

Many important inventions like printing bought an end to the Middle Ages and heralded the Scientific Revolution in the middle of the century and growing knowledge and technology quickly bought about the Industrial Revolution by the 18th century. After the 18th century the world has seen quick changes like increase in population, wars, weapons, commerce, trade, technology, environmental degradation, pollution etc. All this has augmented in generating opportunities and jeopardies which now antagonise the planet's mortal communities.

History of the World

This title is due for release on April 2, 2016
We'll send you an email as soon as it is available!