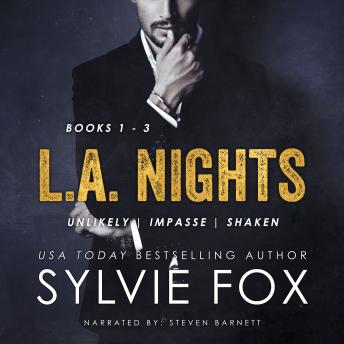 The nights are hotter in Los Angeles
IMPASSE (Book 1)
Divorced and done with her dry spell, Holly Prentice is ready to get back in the game. At six years her junior, Nick Andreis is a perfect stand in for Mr. Right as Mr. Right Now. Will Holly's unexpected pregnancy change the rules of the game? Or can they both decide to play for keeps?
UNLIKELY (Book 2)
There are only two things Sophie Reid doesn't do: lawyers and sex. When sexy lawyer Ryan Becker waltzes into her life, he persuades her to pursue their attraction. But a Hollywood union strikes, and Ryan and Sophie find themselves on opposite sides of the bargaining table. Can their sparks in the bedroom overcome their standoff in the boardroom?
SHAKEN (Book 3)
After he married Jessie Morales, Cameron Becker made a solemn vow: Once mine, always mine. Years later, Cameron still holds fast to this belief, even though he and Jessie are legally separated. When a natural disaster brings them together, Cam is poised to get his wife back. But will Jessie choose family and career over love a second time?