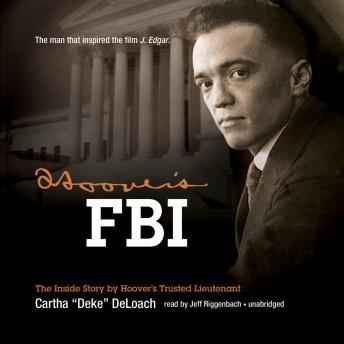 Hoover's FBI: The Inside Story by Hoover's Trusted Lieutenant

Leonardo DiCaprio stars in the upcoming film J. Edgar, directed by Clint Eastwood.
As director of the FBI for over five decades, J. Edgar Hoover left a profound and lasting legacy on this most celebrated institution. Only the few who were part of Hoover’s inner circle know the truth about his controversial years of authoritarian rule and the organization’s inmost secrets.
One of Hoover’s trusted deputies, DeLoach gives us the most authentic account ever written of the FBI, setting the record straight about questions that have plagued modern history. From the assassinations of John F. Kennedy and Martin Luther King, Jr., to the FBI crusades against organized crime and the Communist Party, to Hoover’s disputed sexual orientation and the secret files he allegedly kept to blackmail hostile members of Congress, here is the gripping narrative of a government agency caught on a tightrope between presidential administrations and the limits of the law.

Hoover's FBI: The Inside Story by Hoover's Trusted Lieutenant