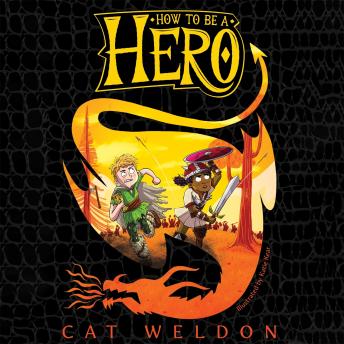 How to Be a Hero: Tales from a Terrible Viking

When failing trainee valkyrie Lotta mistakes an unconscious viking thief, Whetstone, for a fallen hero and takes him triumphantly to Valhalla, things are definitely not turning out to be epic or glorious. Having lost a precious talking cup, Whetstone is also desperate to cover up his mistake and the two embark on a quarrelsome journey to find it and regain their heroic status. But Loki the trickster God is desperate to get his hands on the cup with a plan to unleash chaos across the nine worlds. Can Whetstone prove himself a hero after all when it matters most?

The first in a hilarious and fast-paced trilogy about how to be brave, what it means to be a hero and just how confusing the Norse Gods really are. Fully illustrated throughout, Cat Weldon's How to Be a Hero is perfect for fans of How to Train Your Dragon and Who Let the Gods Out.

How to Be a Hero: Tales from a Terrible Viking