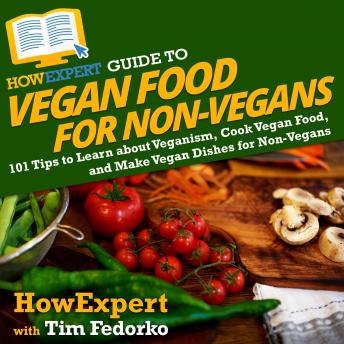 HowExpert Guide to Vegan Food for Non-Vegans takes a unique approach to vegan cooking. Instead of focusing on veganism as a diet or lifestyle, this book approaches it as a cuisine. The belief is that by viewing it through that lens, resistance to trying the cuisine can be reduced. This book consists of recipes, tips, and important reminders for those interested in going vegan entirely. Still, most importantly, it is for those who either want to eat some vegan food or those who are trying to increase the number of healthy options they make for their friends and family.

While there are a few tips that may only resonate with readers trying to transition fully to a vegan diet, these tips are still presented in a way that allows them to provide nutritional information that would benefit all readers. The writing style in this book has hints of sarcasm, bits of corny humor, and above all, is intended to come off as inclusive. The author, who was vegan for some time, is no longer vegan and can present the case for increasing the amount of vegan food you eat without some of the forced tones that some may associate with the cuisine. There was also some time devoted to dispelling (or confirming) some of the myths related to vegan food.

Tim Fedorko is a freelance restaurant consultant and food writer who currently resides in Nashville, TN. Raised in Florida, he has spent nearly two decades in the restaurant industry. Spending time as a chef in a few high-volume corporate restaurants and later opening several of his own concepts. Among them, a successful vegan café and bakery. Tim transitioned from the restaurant industry into writing after moving to Tennessee during the pandemic to be closer to his parents.

HowExpert publishes quick ‘how to’ guides on all topics from A to Z by everyday experts.

This title is due for release on June 4, 2021
We'll send you an email as soon as it is available!