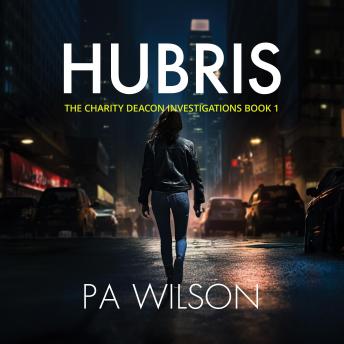 An abducted sex worker. A murdered stranger. Can a private investigator connect the dots and bring down a brutal gang?

Vancouver, British Columbia. Charity Deacon knows her headstrong ways sometimes land her in trouble. But when the inexperienced PI witnesses a horrific car accident, she can’t help rushing in to make sure justice is served. Stunned when the police brush aside her insistence that the driver’s head sported a bullet hole, Charity vows to take matters into her own hands.

Frantically hunting down clues, she’s barely started when a teen prostitute comes banging on her door desperate to find her missing sister. With a trail leading through a tangled maze of ganglands, contract killers, and human trafficking, she uncovers shocking connections between her two cases. But she could be too far into the web to turn back now…

Can Charity expose the menacing conspiracy and rescue the girl before she’s the next victim?

Hubris is the first book in the thrilling Charity Deacon Investigations mystery series. If you like exhilarating non-stop action, gritty female detectives, and life-changing twists and turns, then you’ll love P A Wilson’s well-crafted whodunit.

Buy Hubris to follow a twisted path to freedom today!