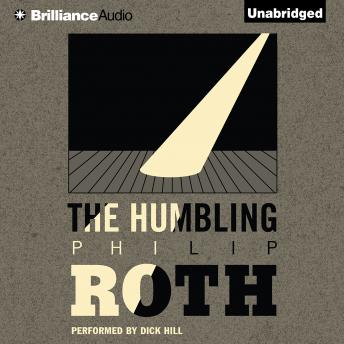 Everything is over for Simon Axler, the protagonist of Philip Roth's startling new book. One of the leading American stage actors of his generation, now in his sixties, he has lost his magic, his talent, and his assurance. His Falstaff and Peer Gynt and Vanya, all his great roles, "are melted into air, into thin air." When he goes onstage he feels like a lunatic and looks like an idiot. His confidence in his powers has drained away; he imagines people laughing at him; he can no longer pretend to be someone else. "Something fundamental has vanished." His wife has gone, his audience has left him, his agent can't persuade him to make a comeback. Into this shattering account of inexplicable and terrifying self-evacuation bursts a counterplot of unusual erotic desire, a consolation for a bereft life so risky and aberrant that it points not toward comfort and gratification but to a yet darker and more shocking end. In this long day's journey into night, told with Roth's inimitable urgency, bravura, and gravity, all the ways that we convince ourselves of our solidity, all our life's performances - talent, love, sex, hope, energy, reputation - are stripped off. Following the dark meditations on mortality and endings in Everyman and Exit Ghost, and the bitterly ironic retrospect on youth and chance in Indignation, Roth has written another in his haunting group of late novels.