Ice: A Memoir of Gangster Life and Redemption'from South Central to Hollywood 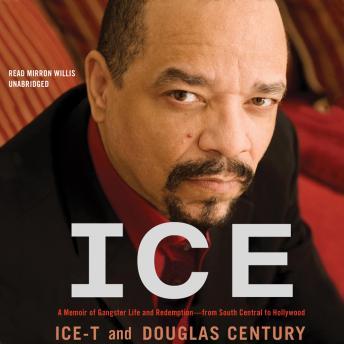 For readers of Sister Souljah's No Disrespect, Nathan McCall's Makes Me Wanna Holler, The Autobiography of Malcolm X, and Monster by Sanyika Shakur comes the definitive memoir from Ice-T, the acclaimed rapper and actor known for telling it like it is.
He's a hip-hop icon credited with single-handedly creating gangsta rap. Television viewers know him as Detective Odafin "Fin" Tutuola on the top-rated drama Law & Order: SVU. But where the hype and the headlines end, the real story of Ice-T-the one few of his millions of fans have ever heard-truly begins. Ice is Ice-T in his own words-raw, uncensored, and unafraid to speak his mind. He talks about his orphan upbringing on the gang-infested streets of South Central, his four-year stint in the US Army, his successful career as a hustler and thief, and his fateful decision to turn away from a life of crime and forge his own path to international stardom. Along the way, Ice shares never-before-told stories about friends such as Tupac, Dick Wolf, Chris Rock, and Flavor Flav, among others. He also offers up candid observations on marriage and monogamy, the current state of hip-hop, and his latest passion: mentoring at-risk youths around the country.
With insights into the cutthroat world of the street-and the cutthroat world of Hollywood-Ice is the unforgettable story of a true American original.

Ice: A Memoir of Gangster Life and Redemption'from South Central to Hollywood