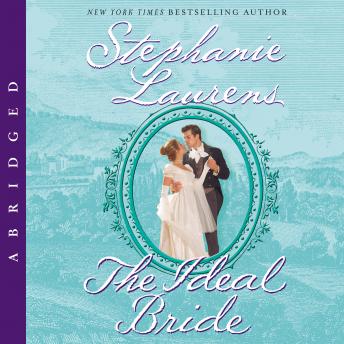 Michael Anstruther-Wetherby is a man destined for power. Except that Michael, for all his political skill and intelligence, lacks the most important element of success: a wife.

So he goes searching for his ideal bride, a gently bred, well-managed young lady. Michael discovers such a paragon, but finds a formidable obstacle in his path, the young lady's beautiful, strong-minded aunt, Caroline Sutcliffe. Caro has lived through an unhappy political marriage, and wants nothing of the sort for her niece, especially as the young woman has already lost her heart to another.

Caro and the younger woman hatch a plot -- Caro will demonstrate why an inexperienced young lady is not the bride for him. In deflecting Michael's matrimonial attentions away from her niece, Caro unwittingly focuses them on herself. And then it is Michael's turn to be persuasive, a task that requires every ounce of his seductive charm.

A series of mysterious and dangerous accidents befall Caro -- it becomes clear that an assailant has stepped in with his or her own idea for Caro's future -- one that could even involve murder. Before Caro can become Michael's ideal bride, they must race to uncover the unknown's identity before all hope of what they long for, and wish for, is destroyed.

This title is due for release on December 14, 2004
We'll send you an email as soon as it is available!