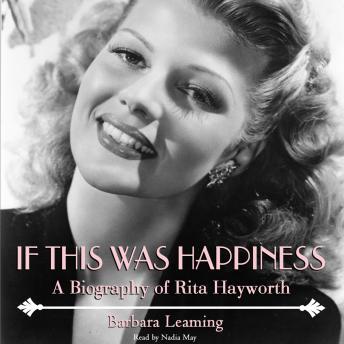 If This Was Happiness: A Biography of Rita Hayworth

Rita Hayworth was the epitome of 1940s Hollywood glamour. A huge box office star, her sultry figure was pasted by GIs onto the first atom bomb ever detonated. Yet behind the smoldering image lay a tragic secret that wrecked her private life. A pathologically shy child, Rita was thrust into the sordid limelight as her vaudevillian father's dancing partner at an early age, suffering sexual and physical abuse at his hands. A desperate need for protection led her into five disastrous marriages, including those to Orson Welles and Prince Aly Khan. At the age of forty-two, Alzheimer's disease began to ravage her mind, cutting short her career at its peak.
This is a haunting and sympathetic tribute to a talented but insecure beauty who was created, and ultimately destroyed, by the movies.

If This Was Happiness: A Biography of Rita Hayworth