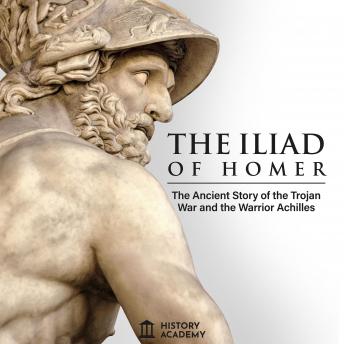 The Iliad of Homer: the Ancient Greek Epic Poem's Complete Edition: the Story of the Trojan War and the Warrior Achilles

The Iliad is the first epic poem in human history and it tells a story about ancient Greek heroes, their brave deeds and the great battles they fought. The events narrated in the Iliad take place in the ancient city of Troy during a siege of ten years. The poem doesn’t only narrate the great deeds of its protagonists but also their tragic fates. History Academy’s translation of the poem is extremely close to the original work of Homer and it can be read by both an experienced reader and an occasional one.

The Iliad was written around 730 B.C. by Homer and it tells the final events of a war between Greeks and Trojans that lasted ten years. The story begins with the confrontation between the invincible warrior Achilles and Agamemnon, the general of the Greek army.

History Academy included in the book some additional material to help the new generations approach the poem. The new introduction will allow the readers to understand the historical context of ancient Greece.

Iliad of Homer: the Ancient Greek Epic Poem's Complete Edition: the Story of the Trojan War and the Warrior Achilles