I'll Never Get Out of this World Alive 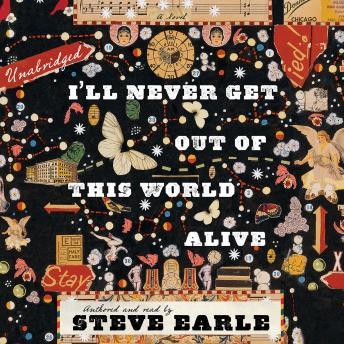 Doc Ebersole lives with the ghost of Hank Williams—not just in the figurative sense, not just because he was one of the last people to see him alive, and not just because he is rumored to have given Hank the final morphine dose that killed him.
In 1963, ten years after Hank’s death, Doc himself is wracked by addiction. Since he lost his license to practice medicine, his morphine habit isn’t as easy to support, so Doc lives in a rented room in the red-light district on the south side of San Antonio, performing abortions and patching up the odd knife or gunshot wound. But when Graciela, a young Mexican immigrant, appears in the neighborhood in search of his services, miraculous things begin to happen. Graciela sustains a wound on her wrist that never heals, yet she heals others with the touch of her hand. Everyone she meets is transformed for the better, except perhaps for Hank’s angry ghost—who isn’t at all pleased to see Doc doing well.
A brilliant excavation of an obscure piece of music history, Steve Earle’s I'll Never Get Out of This World Alive is also a marvelous novel in its own right, a ballad of regret and redemption and of the ways in which we remake ourselves and our world through the smallest of miracles.

I'll Never Get Out of this World Alive