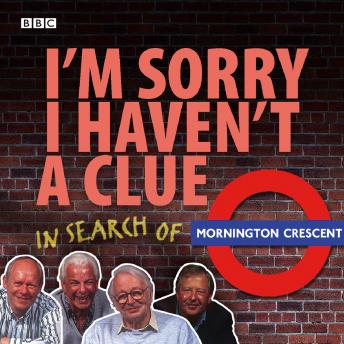 I'm Sorry I Haven't A Clue: In Search Of Mornington Crescent

Mornington Crescent is a game enshrined in many of the legends of our sceptred isle. Now, at last, the eminent broadcaster Andrew Marr peers - with the help of Humphrey Lyttelton, Graeme Garden, Tim Brooke-Taylor and Barry Cryer and many famous fans of I'm Sorry I Haven't a Clue - behind the veil of secrecy which has until now surrounded it. In this extended hour-long special, first broadcast on BBC Radio 4, the myth and mystery of the ever-popular game is finally uncovered, with contributions from well-known experts and enthusiasts of the game: Dame Judi Dench, Sir Michael Gambon, Antony Worrall Thompson, Adam Hart-Davis and Barry Davies. Including extra unbroadcast material, the almost unbelievable story of this illustrious game is told via interviews with historians, scholars and members of the public. It is a fascinating documentary, both for 'Mornington Crescent' novices as well as more seasoned players of the game. As if that wasn't enough, the Clue team also provides readings of four historical accounts on the subject: The Artful Dodgson, The Scandal of Mad Jack Camden, Game and Death On The Line. From Roman times to Chaucer and beyond, 'Mornington Crescent' has become a legend at its own tube stop. Now, at last, its true history can be told.

I'm Sorry I Haven't A Clue: In Search Of Mornington Crescent