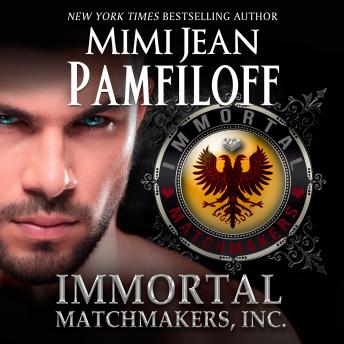 #1 of The Immortal Matchmakers, Inc. Series

(Stand Alone Story with Teaser for Next Book)

SEVEN DAYS TO GO FROM LETHAL IMMORTAL ASSASSIN TO PRINCE CHARMING. DOES HE STAND A CHANCE?

Demigod Andrus Gray may look like every woman's dream, but when it comes to charm, he sees no point in pretending: He has none and makes no apologies for it. Behaving nicely hasn't made him the deadly assassin he is today. But is that really the reason he's still single?

The Goddess Cimil--owner of Immortal Matchmakers, Inc.--thinks yes. So when she foresees a mate in Andrus's near future, she's determined to make the match happen. That means hiring aspiring actress Sadie Townsend to help the barbarian 'act' a little more civilized.

But are seven days really enough? And why does he suddenly have the urge to throw away an eternity of love for just one night with Sadie?