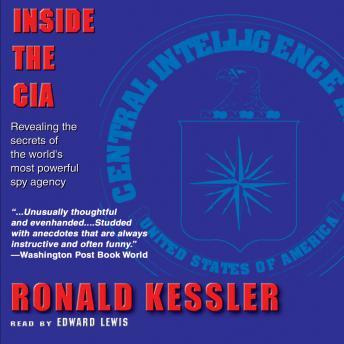 Ronald Kessler’s explosive bestseller, The FBI, brought down FBI Director William S. Sessions. Now, in this unparalleled work of investigative journalism, Kessler reveals the inner world of the CIA. Based on extensive research and hundreds of interviews, including two with active Directors of Central Intelligence William H. Webster and Robert M. Gates and with three former DCIs, Inside the CIA is the first in-depth, unbiased account of the Agency’s core operations, its abject failures, and its resounding successes.
Learn how the CIA spies on every country in the world except Great Britain, Australia, and Canada, undertaking covert action to influence or overthrow foreign governments or political parties. Discover how CIA analysts botched the job of foreseeing the Soviet economy’s collapse. This is your extraordinary tour through the world’s most successful house of spies.