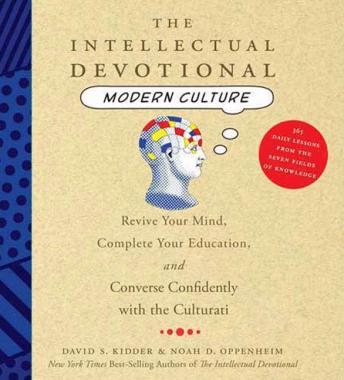 The Intellectual Devotional Modern Culture: Converse Confidently About Society and the Arts

When The Intellectual Devotional debuted in the fall of 2006, it became an instant national bestseller. NBC's Today show judged it a 'great book to give as a Christmas gift.' A year later, The Intellectual Devotional: American History also leaped onto bestseller lists. Now, an avid readership of 'devoted intellectuals' will be eager to build on the knowledge base it acquired in the first two books, and what better way to do so than to dive into the complex and vital world of Western culture?
Here, the authors turn to the fascinating world of our contemporary culture covering the essential artists, works, icons, and consumer products that have defined the way we live and express ourselves. From War and Peace to Catcher in the Rye, from Beethoven to John Lennon, from H. L. Mencken to Marilyn Monroe, from Andy Warhol to American Idol-the defining events and figures from literature, music, film, sports, and pop culture are served up in morsels of daily wisdom that will revive forgotten knowledge and open new horizons of intellectual discovery.