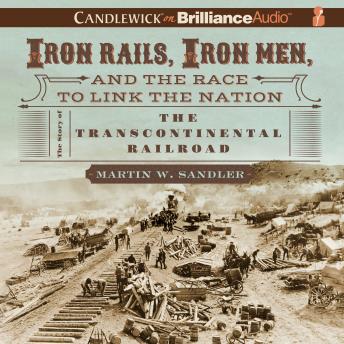 Iron Rails, Iron Men, and the Race to Link the Nation

Just after gold fever swept the West-a time when people walked, sailed, or rode horses for months on end to seek their fortune-the question of faster, safer, more reliable transportation between America's East and West Coasts was posed by lawmakers and national leaders. But with 1,800 miles of seemingly impenetrable mountains, searing deserts, and endless plains between the Missouri River and San Francisco, could a transcontinental railroad be built?

There were believers and there were doubters, but it was the visionaries and the doers-Theodore Judah, Grenville Dodge, Charles Crocker, James Strobridge-who made it happen. They established two railroad companies, the Central Pacific that laid the tracks eastward and the Union Pacific that moved west, setting the stage for a race between iron men with iron wills unlike anything any country had ever seen.

Heroes and scoundrels populate the story of the transcontinental railroad. But it was the tens of thousands of workers who, against all odds and working almost entirely by hand, built the great road. They labored for more than six years blasting the longest tunnels that had ever been constructed, building the highest bridges that had ever been created, battling enormous snow drifts and blistering heat. And when the nation was finally linked by two bands of steel, America was changed forever.