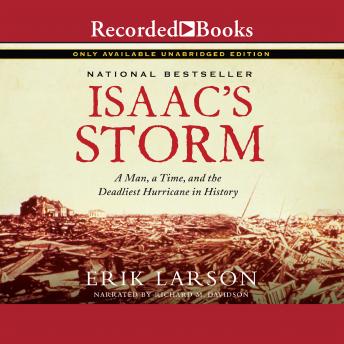 Erik Larson is a regular contributor to national magazines including Time, The Atlantic, and Harper's. Filled with images as powerful as the hurricane it describes, Isaac's Storm immediately swept onto best-seller lists across the country. In 1900, Isaac Monroe Cline was in charge of the Galveston station of the U.S. Weather Bureau. He was a knowledgeable, seasoned weatherman who considered himself a scientist. When he heard the deep thudding of waves on Galveston's beach in the early morning of September 8th, however, Cline refused to be alarmed. The city had been hit by bad weather before. But by the time this storm had moved across Galveston, at least 6,000-probably closer to 10,000-people were dead, and Cline would never look at hurricanes the same way again. Based on a wealth of primary sources, Erik Larson's unforgettable work will haunt you long after the final sentence. Narrator Richard M. Davidson infuses each chapter with added intensity.