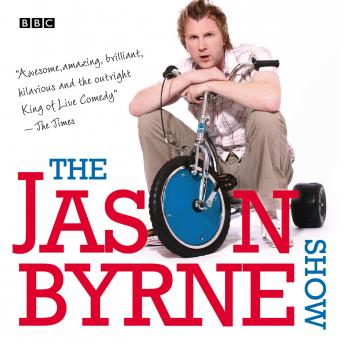 The complete Sony Radio Academy Gold Award-winning BBC Radio 2 series from Irish stand-up comedian Jason Byrne. In three hours of fast-paced comedy, with speedy sketches, audience banter, and lightning-quick improvisation, Jason Byrne shares his experiences across the giant areas of Education, Law, Relationships, Religion, Sport and Medicine. From going on a first date to the birth of his children, from poo in the school playground and 'When Mediums Have Sex' to getting in trouble with the police, all human life is here. As first heard on BBC Radio 2, there's top-notch stand-up, madcap sketches, plus special guest DJ Ivan Brackenbury. Jason Byrne is quick and clever. This is a comic genius at work. 'The delightfully daft Irish comedian' - IndependentWinner of a Sony Radio Academy Gold Award for Best Comedy: 'Organic comedy with great timing and huge warmth. The judges were won over by the best use of the audience in any entry this year and by its consistent laugh-out-loud moments' - The Judges