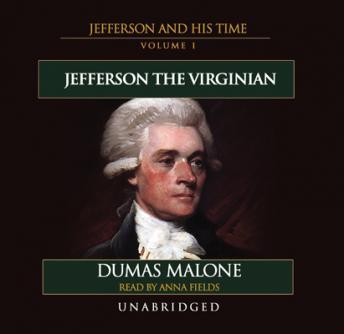 Jefferson and His Time, Vol. 1: Jefferson the Virginian

This is the first volume of distinguished historian Dumas Malone’s Pulitzer Prize–winning six-volume work on the life and times of Thomas Jefferson. Based on vast resources, it covers Jefferson’s ancestry, youth, education, and legal career; his marriage and the building of Monticello; the drafting of the Declaration of Independence and the Notes on Virginia; his highly controversial governorship; and his early services to the development of the West.
This is no mere introduction to the third president of the United States. This is a detailed, elegantly written account of a brilliant political mind and his life in Virginia.

Jefferson and His Time, Vol. 1: Jefferson the Virginian