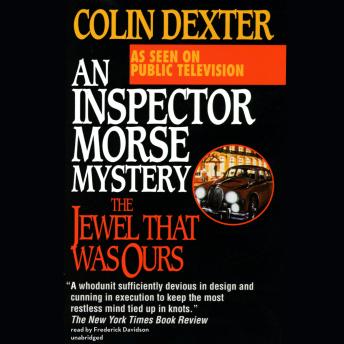 The Jewel That Was Ours

An Inspector Morse Mystery
The case seems so simple that Inspector Morse deems it beneath his notice. A wealthy, elderly American tourist has a heart attack in her room at Oxford’s luxurious Randolph Hotel. Missing from the scene is the lady’s handbag, which contained the Wolvercote Tongue, a priceless jewel that her late husband had bequeathed to the Ashmolean Museum just across the street. Morse proceeds to spend a great deal of time thinking—and drinking—in the hotel’s bar, certain the solution is close at hand, until conflicting stories, suspicious doings, and a real murder convince him otherwise.

Jewel That Was Ours