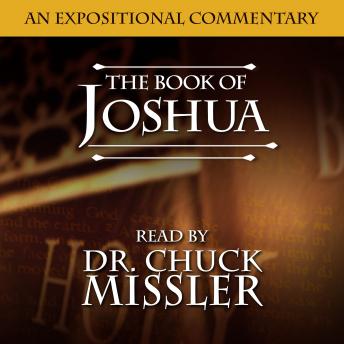 Joshua and The Twelve Tribes: An Expositional Commentary

Under close examination, the Book of Joshua seems to be a precursor to the book of Revelation: another Yehoshua, as Commander-in-Chief, will dispossess the Planet Earth of its usurpers -- first sending in two witnesses, then with a series of judgments of sevens, finally defeating the kings with signs in the sun and moon while the kings of the earth all hide in caves. What does the name 'Joshua' mean?
This study contains 16 hours of verse by verse teachings.
Contents include:
Chapter 1: Introduction to Joshua (its historical, practical, and prophetic aspects). Joshua's personal profile.
Chapter 2-4: Rahab and the two spies. Crossing the Jordan. Two sets of stones.
Chapter 5-6: Spiritual preparation. Encounter with the Captain of the Lord's Host. Conquest of Jericho. Jubilee year.
Chapter 7-8: Defeat at Ai. Sin in the Camp. Victory.
Chapter 9-10: Covenant with Gibeon. Battle at Bethhoron. Completion of the Southern conquest.
The Long Day of Joshua: Detailed study of 10:12-13. Catastrophe models. Calendar study. Orbital resonance.
Chapter 11-12: Northern Campaign. Joshua's generalship.
Chapter 13-24: The Division of the Land.
Twelve Tribes Introduction: Camp of Israel. The Mazzeroth
The Tribe of Judah: Background. The Sceptre departs.
Levi and Simeon: Shechem. The Priesthood. Cities of Refuge.
Joseph: Ephraim and Manasseh: Story of Joseph. Jacob's blessing. Joseph as a type.
Reuben, Gad, Benjamin, & Dan: The Tribes. The Moabite Stone. Jacob's Prophecy.
Zebulun, Issachar, Asher and Naphtali: The Tribes. Summary of the Names of the Tribes.
The Ten 'Lost Tribes': The myth. British Israelism. The Northern Kingdom.

Joshua and The Twelve Tribes: An Expositional Commentary

This title is due for release on January 16, 2019
We'll send you an email as soon as it is available!