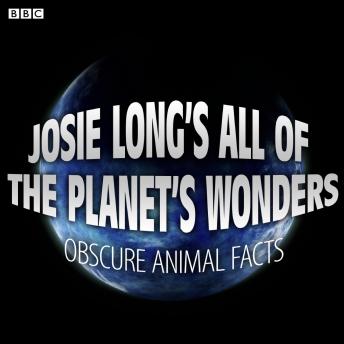 The third episode, ‘Obscure Animal Facts’, of the BBC Radio 4 comedy series, ‘All of the Planet’s Wonders’, in which award-winning comedian Josie Long attempts to better herself through learning from reference books, with help from Irish comedian Maeve Higgins. Originally broadcast 4 March 2009 and repeated on 30 December 2010. In ‘Obscure Animal Facts’ Josie explores the fantastic world of animal trivia in a bid to become the ultimate quiz contestant. To do this she looks back at her animal rights activist past, questions why she grew out of this phase and interrogates her father over his quiz-buff history. This episode features appearances from comedian Chris Neill, Josie's Dad, Geoff Long and host of ‘Jordan, Jesse Go!’ and ‘The Sound of Young America’, Jesse Thorn.