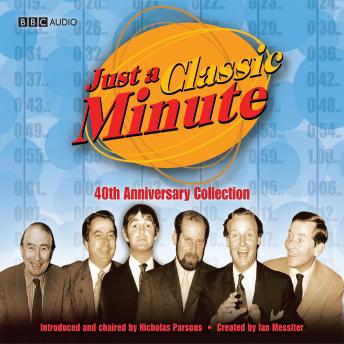 This special celebratory selection of episodes marks the 40th anniversary of Just a Minute, and features episodes from each decade of the programme's history - the 1960s, 1970s, 1980s and 1990s. Nicholas Parsons introduces each episode and provides fascinating background information on the game, as well as memories of its players and its devisor, Ian Messiter. As funny and popular today as when it first began in 1967, Just a Minute challenges contestants to speak for one minute on a given subject without repetition, hesitation or deviation. Regular players include Kenneth Williams, Clement Freud, Derek Nimmo, Peter Jones and Paul Merton. Among the guests who also pit their wits - and their wit - against the clock are Ray Alan, Peter Cook, Stephen Fry, Sheila Hancock, Thora Hird, Geraldine Jones, John Junkin, Maureen Lipman, Alfred Marks, Bob Monkhouse, Jan Ravens, Tim Rice, Wendy Richard, Barry Took, Tommy Trinder and Victoria Wood.