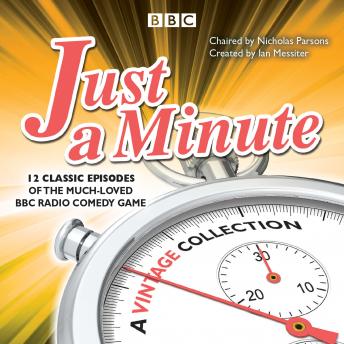 Having matured like a fine wine for over 50 years, Just a Minute continues to improve with age. A full-bodied, cheeky little number, it’s both sparkling and robust, and ideal for almost every occasion. A few bottles of the finest have been brought up from the cellar for this vintage collection.

In these twelve humorous, enlightening and previously unpublished editions — harvested from between 1972 and 2004 — players once again attempt to speak without hesitation, repetition or deviation from the given subject. Challenges fly thick and fast under the unflappable adjudication of Nicholas Parsons.

Which players will be allowed time to breathe uninterrupted, as they demonstrate they have the nose for a corking finish? Find out as we play Just a Minute!

Please note: Contains mild innuendo. The humour in these programmes sometimes reflects the era in which they were first broadcast.