Just A Minute: Anniversary Special: A Celebration of Thirty-Five Years On Air 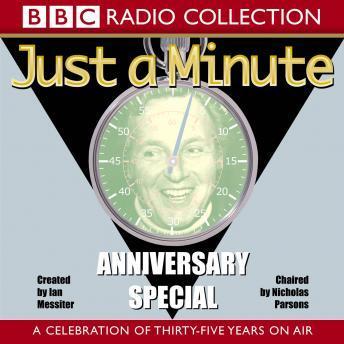 In a special hour-long commemorative edition, panellists Paul Merton, Clement Freud, Graham Norton and Sheila Hancock are asked to speak for one minute on subjects set by members of a specially invited audience - amongst whom are previous Just a Minute players, including Pam Ayres, Gyles Brandreth, Jenny Eclair and Ross Noble. In addition to this, two previously unreleased instalments of the show are included on this release. From the archives comes a classic edition featuring Kenneth Williams, Barry Cryer, Clement Freud and Elaine Stritch, whilst an episode first broadcast in 2003, with players Paul Merton, Ross Noble, Linda Smith and Clement Freud, brings the celebrations up to date. The episodes were recorded at: Playhouse Theatre, London (1 January 2003), Paris Theatre, London (11 September 1982) and Marlowe Theatre, Canterbury (5 January 2003).

Just A Minute: Anniversary Special: A Celebration of Thirty-Five Years On Air