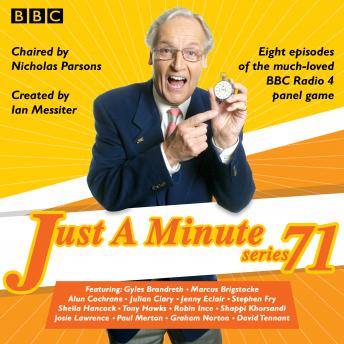 Just a Minute: Series 71: All eight episodes of the 71st radio series

“Welcome to Just a Minute!” As the Minute Waltz fades away, once again a multitude of players pit their wits against each other as they attempt to talk for sixty seconds on a given subject without hesitation, repetition or deviation from the subject.

So join redoubtable chairman Nicholas Parsons as the panellists - including Paul Merton alongside long-time players and newcomers to the game - use their intellect, imagination, wit and verbal dexterity to beat the clock and win the points in these eight sparklingly funny shows.

Just a Minute: Series 71: All eight episodes of the 71st radio series