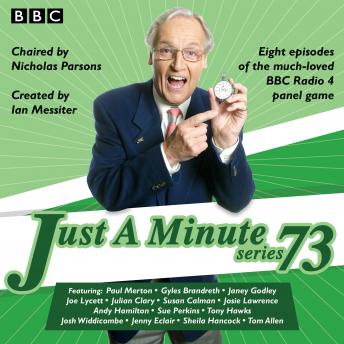 Just a Minute: Series 73: All eight episodes of the 73rd radio series

Just a Minute is a national institution which has entertained generations of listeners since it was first broadcast almost fifty years ago. Its winning formula – contestants must speak on a given subject for one minute without hesitation, repetition or deviation – is a surefire recipe for hilarity.

In these eight episodes – including two special editions recorded at the Edinburgh Festival in August 2015 – the topics range from Street Performers, A Trip to Ikea and the Hippocratic Oath to Kipling, Caravanning and The First Cheque I Ever Wrote.

As ever, unflappable chairman Nicholas Parsons presides over events as the players race against time to beat the clock and win the points. Duration: 4 hours.

Just a Minute: Series 73: All eight episodes of the 73rd radio series