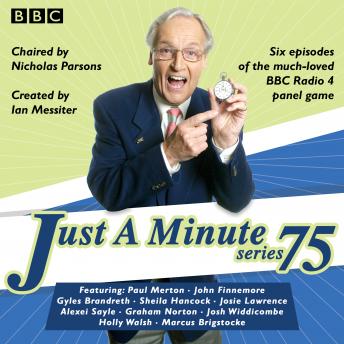 Fresh from winning the Radio Award for comedy in the 2016 Chortle Awards, the perennially popular show returns for a 75th series.

Among the diverse topics they tackle are Halley's Comet, Answering the Telephone, Clock-watching, Insomnia, A Hot Potato, Thomas Hardy, The Hanging Gardens of Babylon, Physics for Beginners and Sellotape.

So as the Minute Waltz fades away, prepare to enjoy the wit, competitive spirit and verbal skills of the plucky panellists as they attempt to speak unchallenged for sixty seconds without hesitation, repetition or deviation. Duration: 3 hours approx.