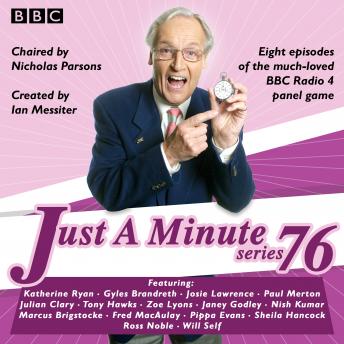 Just a Minute has been entertaining generations of listeners since its first series in 1967. Now Nicholas Parsons and guests return for the 76th series of the panel show where participants must try to speak for 60 seconds without hesitation, deviation or repetition. (No repetition? That's no small order after nearly 50 years...)

Guests include veteran players Paul Merton (now the second most prolific player of the game after Kenneth Williams), Sheila Hancock, Marcus Brigstocke, Gyles Brandreth, Julian Clary, Tony Hawks and Josie Lawrence. Among the other panellists are Nish Kumar and Janey Godley, and appearing for the first time are Will Self, Pippa Evans and Katherine Ryan, who completed the full minute on her very first turn.

The subjects include Maple Syrup, Andy Warhol, The Royal Mile, My Olympic Event, Hair of the Dog, Brighton Rock, Enid Blyton and The French Connection.

So join the plucky players as they prepare to do verbal battle on the show where every second counts! Duration: 4 hours approx.