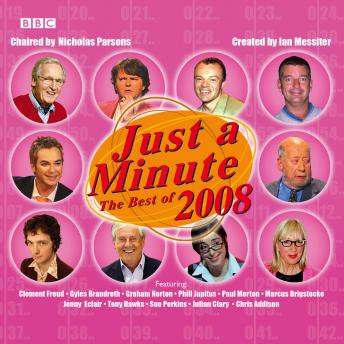 First broadcast in 1967, Just a Minute is one of the longest-running radio comedy shows. A national institution, it is also loved and listened to all around the world. These four episodes find regulars Paul Merton and Clement Freud attempting to talk non-stop for sixty seconds, along with special guests Graham Norton, Gyles Brandreth, Phill Jupitus, Jenny Eclair, Marcus Brigstocke, Tony Hawks, Sue Perkins, Julian Clary and Chris Addison. Among the subjects hilariously tackled are the Scottish play, the A to Z, an infinite number of monkeys, Leonardo da Vinci, The Famous Five, discovering America, Adam’s apple, the end of time and little green men. Join host Nicholas Parsons and the distinguished panellists, as they use their intellect, imagination and verbal dexterity to beat the clock and win the points in these four ferociously funny shows.