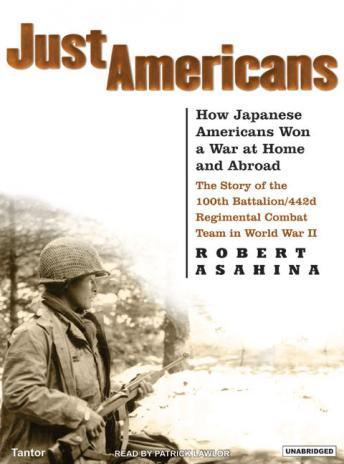 Just Americans: How Japanese Americans Won a War at Home and Abroad: The Story of the 100th Battalion/442d Regimental Combat Team in World War II

A sneak attack by an enemy power leaves thousands of Americans dead. A minority group in America is harassed for its ties to a foreign country. A worldwide conflict tests our resolve in combat abroad and our commitment to justice, equality, and liberty at home...

Within months after Pearl Harbor, 110,000 Japanese Americans were forcibly 'evacuated' from the West Coast, losing their jobs, their property, and their homes. In less than a year, they were 'relocated' and incarcerated in desolate camps throughout the West, Southwest, and South. Yet, incredibly, thousands of young men from the camps joined the Army, to defend the country that had denied them their rights. This is the dramatic story of the segregated Japanese American 100th Battalion/442d Regimental Combat Team-and what they did to affirm their full citizenship. As Gen. Jacob L. Devers put it, in World War II the soldiers of the 100th/442d had 'more than earned the right to be called just Americans, not Japanese Americans.'

During the fall of 1944, the combat team made headlines when it rescued the 'lost battalion' of the 36th 'Texas' Division. At the same time, with the 1944 elections looming, the Roosevelt Administration was debating whether to close the camps. And while the soldiers of the 100th/442d were sacrificing their lives in Europe, the Supreme Court was deciding the infamous Korematsu and Endo cases, which challenged the notion that 'military necessity' justified the 'relocation.'

From breathless battle scenes, masterfully handled in all their detail; to the unbreakable bonds of friendship in the field; to heart-wrenching stories of loss and discrimination on the mainland and in Hawaii, Just Americans tells the story of what Gen. George C. Marshall called the 'most decorated unit in American military history for its size and length of service.' It is also the story of soldiers in combat who were fighting a greater battle at home-a struggle that continues for minority groups today-over what it means to be an American.

Just Americans: How Japanese Americans Won a War at Home and Abroad: The Story of the 100th Battalion/442d Regimental Combat Team in World War II