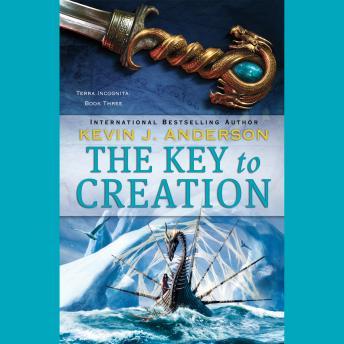 The Key to Creation

Brave explorers and mortal enemies across the world clash at a mysterious lost continent. After long voyages, encountering hurricanes and sea monsters, Criston Vora and Saan race to Terravitae, the legendary promised land. Saan's quest is to find the Key to Creation, a weapon that may defeat Uraba's enemies, and Criston wants vengeance against the monstrous Leviathan that ruined his life long ago.

Back home, two opposing continents and religions clash for the remnants of a sacred city, unleashing their hatred in a war that could end both civilizations. Queen Anjine and Soldan-Shah Omra are driven by mutual hatred, heaping atrocity upon atrocity in an escalating conflict that only their gods can end.

Meanwhile, the secretive Saedrans. manipulating both sides, come ever closer to their ultimate goal: to complete the Map of All Things and bring about the return of God.

This title is due for release on July 20, 2011
We'll send you an email as soon as it is available!